We hope you will join us at our events this semester!
Email reminders with details will be sent to students prior to each event. Please email iwl@nichols.edu with any questions. 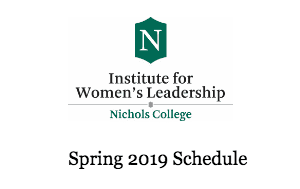 In response to the controversial sexual assault accusations against now Supreme Court Justice Brett Kavanaugh, the Institute for Women’s Leadership sponsored an open forum discussion open to all students and faculty. Brett Kavanaugh was nominated by President Trump to replace retiring Supreme Court Justice Anthony Kennedy on July 9th, 2018. Nearly two months later during the onset of confirmation hearings, a letter written by Dr. Christine Blasey Ford accusing Kavanaugh of sexually assaulting her in high school, surfaced in The New Yorker. After garnering national attention, the confirmation vote was postponed in order to allow both Dr. Ford and Brett Kavanaugh to testify regarding the accusations. The issue quickly became politically charged, with many questions regarding the intent of Dr. Ford’s accusations, as well as questions regarding Kavanaugh’s character. The IWL decided to host a discussion in order to allow all thoughts, opinions, and questions to be heard. We feel it is important to acknowledge and engage with the most pressing political and social issues facing our country, especially those that also affect the Nichols campus, such as sexual assault. It is critical that even in pressing and politically charged times, we as a campus are able to come together to discuss controversial issues, no matter the divide among political, ideological, social, or any other lines. Below is a reflection of the discussion by Nichols student Sophia Prouty:

This year, the IWL decided to hold a discussion to speak about a controversial topic; the sexual assault scandal revolving around then Supreme Court Justice Nominee Brett Kavanaugh. Was he guilty? Was Dr. Ford, one of his accusers, a liar? And is Kavanaugh fit for the Supreme Court? These few questions came with many different answers from people across the nation. Many believed Kavanaugh is innocent and that this scandal should have not even been brought up. Others believe Dr. Ford and that the nation needs to start believing women when they come forward with stories of sexual assault and rape. Others had no idea what to think, for there is no evidence from either party.

Many questions were brought up during the investigation that seemed to be what a lot of this country was asking. One question that I have heard from many students on Nichols campus was why did Dr. Ford come forward over 30 years later? The discussion revealed that talking about a traumatizing event that happened to you, whether it was yesterday or 40 years ago, is not easy to talk about. You have to go back to that moment that is glued to your memory forever and try to tell people your story without breaking down. This is not an easy task. One professor in the discussion pointed out that back in the 80’s, sexual assault was not something people came forward about. Unfortunately, if something had happened to you, you sucked it up and moved on. This is something that many in the room had not thought about.

Another topic that was discussed was how Dr. Ford and Kavanaugh behaved during their testimonies. Several people were quick to point out that Dr. Ford could not behave the way Kavanaugh behaved because she would have been called crazy, or worse. But was Kavanaugh’s yelling and rudeness during the testimony okay? Many people say his yelling was okay because he has right to be mad if he truly is innocent, but how did the way he spoke about Democrats and to people asking him questions not raise any red flags? Was asking Senator Klobuchar if she has ever blacked out okay instead of answering her question? The crowd in the room seemed to agree that this behavior was inappropriate and not suitable for a Supreme Court justice.

Many other topics were discussed during the event as well. These included questions like “how did Trump nominate somebody with so much baggag?” “What does this scandal teach the children in this country?” “How reliable are Kavanaugh’s calendars?” and “Is there a possible other motive for Dr. Ford coming forward besides wanting to let Senators know that they could possibly be allowing an assaulter to have a seat on the highest court in this country?”

There are no definite answers to these questions, but the group believed that this could negatively impact the minds of children who hear of the case. Many questioned whether this will lead to less people coming forward Hopefully not.

After a week-long FBI investigation looking into Dr. Ford’s allegations, there was no evidence found to prove what she was saying is true. The FBI did not speak to any of the parties involved. However, after a heart-wrenching testimony from Dr. Ford and questionable behavior from Kavanaugh, Kavanaugh was appointed to the Supreme Court. Was this a loss for the nation, or possibly a spark of inspiration for more and more people who believe Dr. Ford’s story is true to go out and vote on November 6th? We will have to wait and see what happens on Election Day.

Having a discussion about the Kavanaugh sexual assault allegations is important to have on a college campus. This is because sexual assault is a problem not just at Nichols College, but every college campus in the world. Discussions like these can help to inspire young men and women to come forward about their experiences. The IWL at Nichols College wants to help educate men and women on college campuses that coming forward about a traumatic experiences. The college has many resources to help students and taking advantage of these resources is okay. Plus, this discussion begged for another question to be answered: What can we at Nichols do to help prevent assault and rape form occurring on this campus and help make students feel more comfortable? The answer may not be in making students have an online lesson and take a quiz at the beginning of their freshmen year or being spoken to about it once or twice because many students are not paying attention or forget about it by the next week. Suggestions from students in the discussion were: perhaps a student run organization could help make people feel more comfortable about coming forward about their experiences? It may be easier for a student to come forward to somebody their age that can relate to them more than a professor or staff here at the campus. Further, a student organization could help raise awareness on what assault is and how to prevent it from happening.