The B word is more offensive now than ever before. Some people think it’s no big deal — that it is just another word. Children are saying it as early as kindergarten. It is ruining female’s self-esteem everywhere. It is time to take a stand against the B word…Bossy.

In my nearly 22 years of life, I have seen a fair share of people get called “bossy.” Personally, I’ve been deemed bossy more times than I can even imagine. Why is it that authoritative girls and women are told they’re being bossy negatively while their male counterparts are being praised for taking charge?

Dictionary.com defines bossy as an adjective: “given to ordering people about; overly authoritative; domineering.” The Merriam-Webster dictionary defines bossy as: “inclined to domineer.”

But, we’re in 2014 now! Surely that isn’t a problem because women have come so far, right? As a coach of a high school dance team, the oldest cousin out of nine (six of whom are girls), and a woman in business myself, I can say with confidence that you’re wearing rose colored glasses. To see if being “bossy” is still a problem for our youth, I sat down with my two little cousins. Michaela is seven and a half and Annabelle is five. Both of these girls are in elementary school. I asked them if they had ever been called bossy. They nodded. I asked them if they had ever called someone bossy. The nodded, this time hesitantly. I then asked them what it meant to be bossy. I received nervous stares in response. Confused, I urged them to at least give me some kind of answer or reason as to why they couldn’t tell me. The girls whispered back and forth to each other for a few minutes. Annabelle broke the silence and told me she couldn’t tell me what bossy meant because it was a mean word. Michaela then spoke up saying that being bossy meant you were mean girl and that people wouldn’t like you if you told them what to do. A sad expression crossed her face. I later found out that a classmate had called Michaela bossy when she tried to help them learn the rules for something in school.

But let’s bring it back for a moment. A mean girl. Why is it that bossy is meant to be derogatory towards females? Why does society want to take away our ability to be assertive? Isn’t that what people look for in a boss?

Just to gauge the meaning of the word bossy a little more, I asked some college-aged women what bossy meant. Several responses were along the lines that a bossy person is a woman that tries to take control of something/a group of people. I also heard that it was someone that tried to control others. Interesting… Isn’t that the definition of a boss?

Here we are in our advanced society, belittling character traits that are necessary in the world of business. We wonder why women get paid $0.78 for every $1 that a man makes, why women cannot seem to negotiate the way that their male counterparts can, and why women are just now starting to make up a small percentage of CEOs of Fortune 500 companies (5% or 25 women to 475 men). We need to start teaching youth that being bossy isn’t a bad thing! We need to empower these little girls to become leaders.

This gives us two options: ban bossy or embrace bossy. If we are going to consider bossy to be an insult, we need to rid it from our vocabulary and replace it with words like assertive or leader. This is probably best for our youth. For all of us who have grown up being afraid to be that bossy woman, this is our chance to own it. Being called bossy means that you’re controlling a situation, taking charge, being assertive, and making your mark. Let us stand together and show that bossy is just another way of saying we are doing something right.

To learn more about the “#BanBossy” movement, visit BanBossy.com and join the likes of Beyoncé and other powerful women taking a stand to make a change in how young girls and women think of themselves. 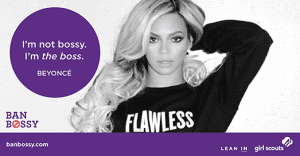